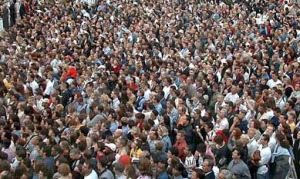 Whether it’s crowds of protesters in Egypt or crowds of preteen Justin Bieber fans, the thought of throngs of people flocked together can be about as appealing as a bowl of rancid raspberries topped with beetles. But next time you’re crushed in a crowd of sweaty, germy humans, here are some tips for avoiding a good old fashioned trampling.

If you are a fan of crowds, but not a fan of being trampled, you’re in luck. According to Slate.com, huge crowds can be safe; it’s the smaller crowds that should concern you. It only takes the force of a handful of people moving forward to suffocate a human being.

If you do find yourself in the unfortunate situation that is a large group of people, try to stay as near to the perimeter as possible. It’s also wise to keep as much space around you as you can, as more than four people per square meter can compromise safety. If you don’t know what a square meter is, if there are people within touching distance of all four sides of you, then that’s too many.

If you feel the crowd bunching up around you like a pair of pantyhose losing elasticity, Slate advises that you “go against the grain.” Walk sideways and backwards in the direction that the masses aren’t moving, zigzagging your way to safety.

Often times large crowds become deadly over someone falling down or one part of the crowd being unaware of what’s happening at a different point in the crowd, so as much you’d like to punch someone near you, remember that large crowds assume a life of their own.

But the best advice? Just stay home and lock your doors.